Welcome to the post-symposium page!

Giving and taking – An article by Peter Stewart:

Tong-len means ‘giving and taking’ in Tibetan.  Keith Hackwood led a Tonglen meditation as part of a plenary session on Selfcare for Coaches Using Mindfulness, immediately after lunch at the first Psychosynthesis Leadership Coaching symposium on 14thNovember. “A difficult slot to fill”, he noted. There were around 60 people in the room, from the Institute of Psychosynthesis, Psychosynthesis Trust, various psyschotherapy and coaching associations, and from Psychosynthesis organisations from as far afield as Norway and Italy.

Lunch had been replete with conversation and ideas. I felt a buzz of excitement in the room as we settled down, shaking out the tension from arms and legs. For some reason, I could smell orange blossom.

Tong-len is a meditation practice from Tibetan Buddhism that uses breathing to explore feelings of altruism and compassion. The in-breath connects you with suffering – your own, others – and the outbreath with compassion for the world. Keith explained the concept, touched on the paradox of effortless effort in practicing meditation, and quoted a poem by Antonio Machado, translated from the Spanish by Robert Bly. The rest of the session was experiential, reconnecting with our feelings, letting them go, reconnecting with thoughts, letting the mind go still. I felt shocks of anxiety at the start, but after a while that gave way to a feeling of tidal movement, an ebb and flow, the traffic noise outside and the cry of seagulls.

The mix of experiential and conceptual was a strong point of the whole day, which was superbly organised by Rachel Houghton, Paul Elliot and Aubyn Howard of Psychosynthesis Coaching Limited (PCL).

Roger Evans, director of the Institute of Psychosynthesis, introduced the Symposium in the morning with a paradox:

Roger explained something called the Six Session Model and the use of Trifocal Vision in coaching. Many of those attending, including myself, were familiar with these models from the Certificate course in Psychosynthesis Leadership Coaching organised by PCL and run at the Institute, and Roger brought them alive with what I felt was a unique and passionate engagement with each individual in the room.

Roger’s talk on psycho-spiritual coaching gave a flavour of why psychosynthesis works at such a deep level, by focusing on meaning rather than just performance. I was moved by Roger’s commitment and passion, and the tribute he paid to his family. Then there was a brief moment when I felt that the world stopped turning. Roger asked the question: “What do you feel when you open your heart to another?” Various words were shot out from the audience – I seem to remember joy, openness, waiting, loneliness, but when someone responded “pain” it felt like an arrow had hit its target.

After Roger’s plenary session, we split into two workshops. In the morning, Keith Silvester and Heather Wignall from the Psychosynthesis Trust talked about coaching in a VUCA world, while Ruth Rochelle gave a workshop on systemic coaching and constellations. The same pattern was followed in the afternoon. After Keith Hackwood’s plenary, Harriett Hanmer and Laira Gold gave a talk with the title The Body Speaks while Aubyn Howard explored the theme of Developmental Thinking for Coaching.

The workshops sharpened my awareness of the paradox at the heart of coaching. I felt this most explicitly during Ruth Rochelle’s exploration of constellations, which used Post-it notes as the main prop. Ruth’s workshop comprised two constellations: the first revolved around depicting ’where I live‘ on the Post-it, and exploring how place and movement can affect the felt experience of that; the second involved representing three phases of your life on Post-its, and then exploring the feelings associated with these with the help of a coach.

While the experiential nature of the workshop was very powerful, space felt rather tight in the room, with more than 30 people in a circle of chairs, so I did not slip easily into this, feeling bombarded by others. I noticed my body getting slightly hot and then my mind rushing to compensate. As I settled down I was able to get a sense of being back in the moment, but I kept on trying to make mental sense of what was going on around me as people milled around the room without any words. My mind grabbed at thought as a way of filling these gaps. But as the workshop evolved, I felt more tuned into myself and somehow that left me feeling more in sync with other people.

Somatic coaching is increasingly being used as a pathway to deeper levels of self-awareness and of experiencing others. Later in the day, a workshop on equine-guided learning introduced the statistic that only 7% of personal communication is through spoken words, while 38% is dependent on voice and tone, and 55% on body language.

From the feedback after the constellations workshop, people had experienced a huge range of emotions through the constellation, but at a much deeper level than the cognitive-rational. And the workshop resonated with many in terms of how they could use their experience with their own coaching clients.

Moved to tears by horses

From Ruth’s workshop I got a sense of the power of using the entirety of Self in coaching, and how constellations could be used to explore the Self at a deeper level. This theme was picked up in the afternoon in Harriet Hanmer and Laira Gold’s workshop The Body Speaks (they will be holding a day for practitioners of Equine-Guided Learning on 16 March 2019).

Harriet and Laira work with horses to help senior executives explore systemic interactions in their organisations. Many managers are simply unaware of these. I found myself strangely amused by the idea of company directors milling around in the mud at Manor Farm House in Colston Basset in Welly Boots, where Harriet and Laira work, exploring the Mind-Body split. But I was moved when I saw a photo of the sympathetic body language between one horse and the MD of a company, and we learned that he had been moved to tears by the human-horse interaction.

Harriet introduced the theory of the ’triune‘ brain, with its human (neocortex), mammalian (limbic system) and reptilian layers, which although nowadays under scrutiny from neuroscientists, provides a framework for moving beyond the conscious ’thinking‘ part of our brains and into the less charted realms of the limbic system and more primitive sub-conscious layers.

After the talk I spoke with Laira about whether equine-guided learning could be used in schools. I had watched a documentary about a ’failing‘ school (Ofsted’s word, not mine) and I was struck by how discipline in schools focusses primarily on verbal affirmations by young teenagers. I felt from the documentary that their body often contradicted their words and, although I don’t know horses, I occasionally had felt a similar kind of resentment and dissonance when walking with donkeys.

I can imagine many other uses for equine work. “The world needs this,” Harriet and Laira affirmed.

Are we in the soup?

One of the last slides in Harriet and Laira’s deck asked the question: “Are we in the soup?” I use this question as a segway to mention the two workshops I was unable to attend.

Keith Silvester from the Psychosynthesis Trust talked in the morning on Coaching in a VUCA world, with Heather Wignall. I felt there was synchronicity in the fact that Keith’s talk coincided with the day a Brexit agreement was finally thrashed out by the May government and the European Union.

VUCA stands for Volatility, Uncertainty, Complexity and Ambiguity. Keith and Heather suggested that the four aspects of VUCA map on to psychological themes that are taught in psychosynthesis and other therapeutic models. From the programme notes, these are: lack of object constancy, which maps from Volatility; existential survival anxiety (from Uncertainty); systems thinking and mind development (from Complexity); and relative meaning and interpretation (from Ambiguity).

In a session that provided impressive thought leadership, Heather and Keith also talked about VUCA in relation to ‘adaptive leadership’ (as developed by Ron Heifetz and Marty Linsky, through a book of that name). As one workshop participant observed: “The VUCA model …links to a really useful leadership model [adaptive leadership] and the workshop included a practical tool to use in coaching related to this” which a number of participants said would be useful in their current coaching work. As noted by Heather and Keith: “Adaptive leadership is specifically designed to support personal and organisational leadership” in a VUCA context.

The VUCA theme linked naturally to the evolutionary perspectives discussed in Aubyn Howard’s session in the afternoon on the current crisis in leadership. Aubyn introduced Frederic Laloux’s evolutionary paradigm, familiar from the book Reinventing Organizations: A Guide to Creating Organizations Inspired by the Next Stage in Human Consciousness. Laloux’s book is premised on the idea that corporate culture has evolved from highly hierarchical top-down structures to more ethically-driven self-governing and self-regulating structures build around committed teams; in the book’s colour scheme, from red to teal organisations.

Those attending the workshop split into groups and discussed how coaches could support leaders to make a developmental shift in their consciousness. This is what Aubyn calls ‘The Big Question’. He challenged: “How can we as coaches nurture, activate and encourage the evolutionary paradigm in emergent leaders in organisations and society?”

But back to my earlier question: are we in the soup? My impression from those I spoke to after they attended both the VUCA and developmental sessions is that the answer is a resounding yes. The world is in a mess.

But at least psychosynthesis offers hope that we can find a way out of the crisis we are in. The day ended with a brief discussion on neuroscience, and we were lucky to have an expert in the field in the audience.

Aubyn talked about neuro-plasticity, the idea that the brain is an adaptive organ that can evolve and develop over the course of an individual lifetime.

Roberto Assagioli, the founder of psychosynthesis, set great store by the exercise of Will in the emergence of Self. I found it mind-blowing that neuroscience is discovering mechanisms by which consciousness can evolve over the space of a lifetime, as a result of individual purpose and the pursuit of meaning, rather than passively as a series of random mutations. It seemed like a powerful link to Assagioli’s heritage and teaching.

As Aubyn said at the start of the Symposium: “The whole world of psychosynthesis is rejuvenating. It feels like it’s flourishing and it’s in touch with the zeitgeist”.

I look forward to next year’s Symposium and the opportunity to take these conversations into yet newer realms!

Blankets, food, protection. And a plan worthy of Europe’s big words about values. This is what people at the Greek border must get from us. Not tear gas and smoke grenades! @vonderleyen @EP_President @eucopresident! #HumanityFirst http://wemove.eu/gr-tu

We had our second Psychosynthesis coaching symposium on Wednesday 12th February- lots of lovely feed back on LinkedIn, but please post what made the most impact to you? And what could have been better?

We have some places left on our 8th 5 month,15 day acclaimed Post Graduate Certificate in Psychosynthesis Leadership Coaching Prog starting on 14th February. http://bit.ly/PCLcoach Contact me at paul@psychosynthesiscoaching.co.uk if you want to know more 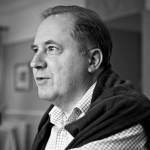